Structural Safety: the Life and Death Question of Your Supply Chain

Structural Safety: the Life and Death Question of Your Supply Chain

The 2013 Rana Plaza collapse in Bangladesh, which killed over 1,100 and injured more than 2,500, holds the record for the deadliest accidental structural failure in modern history. While this tragedy has illuminated the lack of structural safety in low-cost sourcing locations, staggering numbers of suppliers are still at risk for structural failure.

Understanding the risks and taking the right measures to ensure the safety of your suppliers will help prevent a reputational disaster for your brand. This whitepaper will bring you up to speed on the facts about structural failures and explain how you can mitigate your risk by identifying issues and taking corrective action.

Status of Structural Safety Amongst Suppliers

After Rana Plaza, events such as the Tianjin blast in China, the Lahore collapse in Pakistan, and the Venezuela fire in the Philippines, have killed and injured hundreds. This year, structural audits from developing areas have revealed a shocking number of factories in immediate risk. Explore the full set of facts and figures from events and audits to gain a clear perspective on structural safety risks.

Unauthorized construction and modification, violation of safety regulations, and negligence are some of the leading causes of collapses and fires. View the full list along with succinct explanations on the main risk factors for structural safety in factories.

Structural and fire safety audits are the first step to mitigating risk, followed by the implementation of a corrective action plan. Find out what tools are available to you for ensuring supplier compliance and mitigating risk.

Percentage of Factories in Immediate Risk 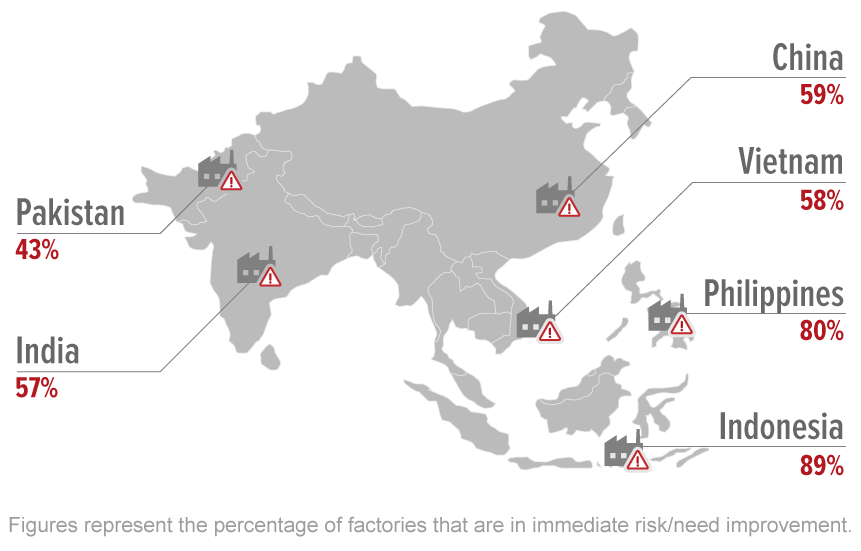